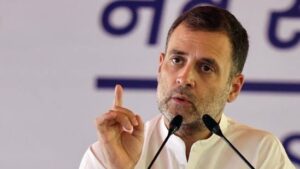 The Enforcement Directorate (ED) has begun questioning Rahul Gandhi at its office in the national capital on Monday, officials said.

According to the official, three senior officials of the ED are currently questioning the Congress leader.

“The team consists of two Assistant Directors and one Deputy Director,” said the official.

On the way, Rahul was accompanied by his sister Priyanka Gandhi Vadra, however, she left minutes after they reached the ED office.

The ED had summoned Rahul Gandhi and party chief Sonia Gandhi in connection with the National Herald case for allegedly misappropriating funds.