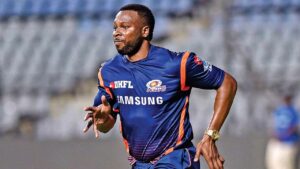 MI Emirates today announced its team ahead of the inaugural edition of UAE’s International League T20 (ILT20). The squad will be based in Abu Dhabi and includes a mix of current and past Mumbai Indians (MI) players, and new players who join the #OneFamily. Kieron Pollard, Dwayne Bravo, Nicholas Pooran and Trent Boult are set to join the MI Emirates ahead of the inaugural edition and will adorn MI’s iconic blue and gold amongst the others.Akash M Ambani, Chairman of Reliance Jio, said, “I am delighted with our dynamic group of 14 players that will be part of our #Onefamily and represent ‘MI Emirates’. We are glad to have one of our key pillars, Kieron Pollard continue with the MI Emirates. Joining us back are Dwayne Bravo, Trent Boult, and Nicholas Pooran. A very warm welcome to all players of MI Emirates. MI is known to strike a balance between experience and investing in young talent to unlock their true potential which will help us play the MI way. This is what fans expect from us and will drive the MI ethos forward.” The players have been signed as per the league guidelines and the local players from UAE will be added to the squad in the near future: Kieron Pollard (West Indies), Dwayne Bravo (West Indies), Nicholas Pooran (West Indies), Trent Boult (New Zealand), Andre Fletcher (West Indies) Imran Tahir (South Africa), Samit Patel (England), Will Smeed (England), Jordan Thompson (England), Najibullah Zadran (Afghanistan), Zahir Khan (Afghanistan), Fazalhaq Farooqui (Afghanistan), Bradley Wheal (Scotland), Bas De Leede (Netherlands). Earlier this week, MI announced the name and identity of ‘MI Emirates’ or phonetically “MY Emirates”, a team dedicated to the fans across the Emirates geographies. The owner of the IPL cricket team Mumbai Indians, Reliance Industries on Wednesday unveiled the name and brand identity of the two new franchises which will be joining the Mumbai Indians family.The two teams, MI Emirates in UAE’s International League T20 and MI Cape Town in Cricket South Africa T20 League, will adorn the iconic blue and gold of the team. These names were chosen as they call out the specific regions from where the teams will be based, it said in a statement. In addition to unveiling the brand identities, the social media handles for both teams also went live on Wednesday.