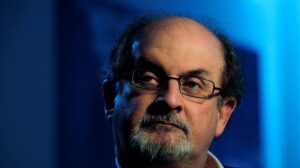 Salman Rushdie, the Indian-born novelist who spent years in hiding after Iran urged Muslims to kill him because of his writing, was stabbed in the neck and torso onstage at a lecture in New York state on Friday and airlifted to a hospital, police said.
After hours of surgery, Rushdie was on a ventilator and unable to speak on Friday evening after an attack condemned by writers and politicians around the world as an assault on the freedom of expression.
“The news is not good,” Andrew Wylie, his book agent, wrote in an email. “Salman will likely lose one eye; the nerves in his arm were severed; and his liver was stabbed and damaged.”
Rushdie, 75, was being introduced to give a talk to an audience of hundreds on artistic freedom at western New York’s Chautauqua Institution when a man rushed to the stage and lunged at the novelist, who has lived with a bounty on his head since the late 1980s.