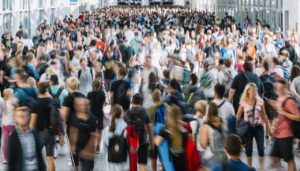 New Zealand’s resident population provisionally grew by 12,700 or 0.2 per cent over the year, to reach 5.12 million on June 30, the lowest annual growth rate since June 1986, the country’s statistics department said on Tuesday.New Zealand’s population change is a combination of natural increase (births minus deaths) and net migration (migrant arrivals minus migrant departures), Xinhua news agency quoted Stats NZ as saying.”The net migration loss combined with a lower natural increase has resulted in this low level of population growth,” population estimates and projections acting manager Rebekah Hennessey said in a statement.In the year ended June 2022, the number of births remained around 61,000 while the number of deaths grew by 10.1 percent to 36,900, due partly to population aging, Hennessey said.She added this led to a natural increase reducing to 24,100 in the year ended June 2022 from 27,700 in the year ended June 2021.Among broad age groups, the population aged 65 years and over was the fastest growing, with an annual increase of 2.8 per cent, she said, adding most of this increase was a result of people born in the mid-1950s turning 65 and moving into this age group.