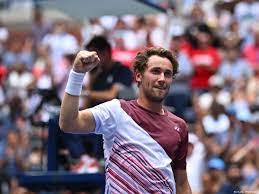 Following Casper Ruud’s defeat to Novak Djokovic in Sunday’s ATP Finals summit match, the 23-year-old Norwegian will finish the year at World No. 3 in the ATP Rankings. While thanking his team during the ceremony, Ruud underlined his excitement about next year.”To my team, another year has passed on the ATP Tour. Thank you to everyone who helps me and pushes me every day, Without you, it would not be possible. It has been a year of many highs, some really big highs. Of course, some lows. I look forward to the next season already,” Ruud said after the match at the award ceremony.”In the end, it’s been disappointing to end up losing these big finals,” Ruud said, reflecting on the past 11 months.”Overall, if you gave me the offer to end the year at No. 3, and play the finals that I’ve played, at the 1st of January this year, I would probably sign the contract right away. No doubt about it,” ATP.com quoted Casper Ruud as saying.Asked again about his record this year in finals, he later added: “It gives me motivation and a hunger to maybe next time if I ever get to another final like this… I hope I can learn from what I have done this year and have not been able to do and see how it goes. I just feel like I still have room for improvements, even though I’m very happy with my game and how things have turned out this year.”Ruud was extremely shocked by his campaign this week in Turin, the indoor surface not favourable to his looping groundstrokes.Serbian tennis star Novak Djokovic earned a record-equaling sixth ATP Finals singles title win, beating Norway’s Casper Ruud in the summit clash. Djokovic defeated his opponent by 7-5, 6-3 to walk away with a historic payday of $4.7m.”This result to me is maybe one of the most surprising, finishing the year here on a blistering fast indoor hard court, making the final — not something that I found very likely,” he said after his 7-5, 6-3 defeat to Djokovic.”Maybe neither did I, in the US Open, [expect] to make the final. I’ve overachieved compared to my own mind, so I’m very happy about that,” he added.