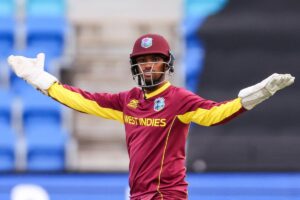 Nicholas Pooran, the captain of the West Indies at the 2022 T20 World Cup, stepped down from the white ball captaincy of the former world champions on Monday. Pooran cited “the enormous disappointment of the T20 World Cup” as the reason behind the decision. At the 2022 T20 World Cup, West Indies could not qualify for the Super 12 stage after winning just one match in the preliminary group stage. Despite being grouped with teams like Zimbabwe, Ireland and Scotland, West Indies finished at the bottom of the table. Pooran was named the West Indies captain in ODIs and T20Is in May this year after the retirement of Kieron Pollard.’I have given the captaincy a great deal of thought since the enormous disappointment of the T20 World Cup. I took on the role with great pride and dedication and have given it absolutely everything over the past year,” Pooran said in a statement.”The T20 World Cup is something that must not define us and I will readily get involved in the upcoming reviews. And whilst it will be several months until we reconvene as a squad, I want to give CWI plenty of time to prepare for the matches against South Africa in March and beyond.”Porran added that he would continue to serve the West Indies team as a player