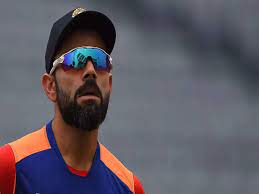 New Delhi: India captain Virat Kohli’s eyeball-grabbing media conference has forced a shell-shocked BCCI into a huddle as it explores its options on how to deal with the crisis while ensuring that the team is not distracted by off-field drama ahead of an important Test series.

The Indian Test captain, during a press conference before departing to South Africa for a three-match series, said that he was never asked ‘not to quit T20 captaincy’, contrary to what BCCI president Sourav Ganguly had said to various media outlets.
There are hardly any instances in the past where it becomes a choice between the word spoken by a sitting captain, who is also the reigning superstar of Indian cricket, against a decorated former skipper, who holds the chair of the president.
It is understood that no one in BCCI is happy at what transpired on Wednesday but they also understand that any strong reaction in their bid to do a quick-fix could be counter-productive.
While Kohli reached South Africa this evening, the board president, in Kolkata, made it clear that he will make no public statement.
”No statements, no press conference. We will deal with it, leave it to (the) BCCI,” Ganguly told media-persons in his home town.
It is reliably learnt that the senior BCCI office-bearers, including Ganguly, secretary Jay Shah were engaged in a zoom call on Wednesday where a collective decision was taken that none would do a press conference or issue a press release.
‘Expert opinion was taken on how to deal with the sensitive matter as it also involves the respect of a president’s office. The BCCI knows that a Test series is round the corner and any hasty decision or statement from them could affect the morale of the team,’ a senior BCCI source on conditions of anonymity.
The best way is for both the captain and the president to sit across the table and amicably sort out the difference of opinion or mis-communication where statements perhaps have been lost in translation.
However, as of now, neither Ganguly nor Shah might speak to the captain.
Normally, a centrally-contracted player is not supposed to make any critical comments about the establishment or office-bearers.
But whether Kohli’s clarification on what transpired, in response to a questio , rather than making a statement would amount to breaking the protocol is also a question.
So there are no easy solutions to this problem.
The Indian captain, a veteran at handling media for more than 13 years now, knew exactly what was coming his way and he was prepared.
Like a master batter, who can dictate terms to the bowlers, Kohli was in charge at a press meet that the board had organised and in a very articulate manner put forth his views on three issues.
Firstly, rubbishing the rumours about his non-participation in the three ODIs, secondly, inform the world how he was told about his removal as ODI captain 90 minutes before a team selection meeting and lastly, contradicting Ganguly on whether he was sked to stay on as T20 skipper.
If one hears all his statements, he never expressed any official displeasure at his removal which he said was understandable because of lack of ICC silverware.
Kohli, who loves a good scrap, often thrives in these situations and if he gets a couple of hundreds in South Africa, he would be in a very strong position. If the team wins the series, which will be his last frontier as India Test captain, that will be icing on the cake.
So, will the BCCI just let it pass? Perhaps not but as of now, chances of a satisfactory reconciliation look dim.
What it seems like is a long drawn battle of chess — which the BCCI mandarins would ideally want to end in a ‘respectable draw’ so that Indian cricket is the winner.
Tags: