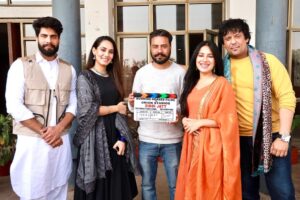 The movie will bring the sand mining mafia of Punjab to the silver screen for the first time in India. The man behind the success of Jatt Boys Putt Jattan De and 25 Kille Movie, Simranjit Singh Hundal will helm the director’s seat for the Ziddi Jatt. Simranjit Singh Hundal himself is also doing the story and screenplay.

Ziddi Jatt producers Ricky Singh Bedi, Ramandeep Singh, and Barinder Singh promise that the movie will have some high octane action scenes like never before in the Punjabi movies. The three producers and the Co-producers, Gauri Arora, Jimmy Asija, and Kailash Chandna, have hired the top South Indian action crew to direct the set-piece breathtaking action sequences. Furthermore, Suresh Babu will handle the DOP, and the entire cast in the movie will be seen mouthing the dialogues written by Deedar Gill. This ambitious Punjabi movie will even have crowd-pleasing music given by Ullumanati (Anup Kumar). Also, Jatin Dharna is the executive producer for the movie.

Ranjha Vikram Singh said, ‘The movie will aim to entertain the masses with its action sequences and several fun scenes. Right from the three producers to the entire movie cast, director Simranjit Singh Hundal, DOP, music, and the action team have put in a massive effort to come up with Ziddi Jatt which the audience can look forward to a full “Paisa Wasool” experience with lots of fun, action, and entertainment.’