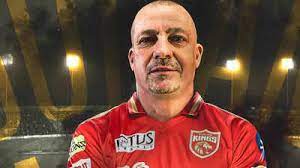 Wood is considered a pioneer in power-hitting coaching having worked with players across IPL, the Big Bash League and other T20 leagues.

He has individually worked with the likes of Ben Stokes, Prithvi Shaw, Sam Billings and Carlos Brathwaite on the science of staying still and hitting the ball out of the park.

The 53-year-old will work on the Punjab batters alongside assistant coach Jonty Rhodes, who has been given the additional responsibility this season besides the fielding department.

‘We are jubilant to announce Julian Ross Wood as our new batting consultant for #TATAIPL2022,’ the team wrote on social media.

The franchise had a fairly successful auction as they roped in the likes of Jonny Bairstow, Shikhar Dhawan, Liam Livingstone, Kagiso Rabada and Shahrukh Khan.

Punjab had Wood on their radar for the last two years but were finally able to secure his services last week.

Wood had been approached by other IPL teams in the past but the COVID-19 pandemic contributed to his late arrival in the world’s biggest T20 league.

‘We wanted him earlier as well but it did not materialise. We were tracking his work for the past two years and he teaches a must have skill to the batters,’ a Punjab Kings team source said.

‘We too have a bunch of power-hitters in the squad and they can also pick the brain of someone like Wood. It was Jonty who first spotted him and we are happy to have him on board,’ added the team source.

Punjab badly need a turnaround in their fortunes, having finished 6th out of 8 teams in the past three seasons. Their only final appearance came in 2014.