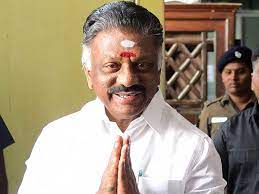 Chennai: AIADMK coordinator and former Chief Minister O Panneerselvam has demanded that the first semester examinations for the first year engineering students, scheduled to commence on 21 March, be postponed by one month, after which they could be held through online mode.

‘The Anna University’s proposal to conduct first semester exams physically from 21 March have shocked the students,’ the AIADMK leader said.

Stating that only 60 days of physical classes were conducted for the first semester, he said, ‘Colleges, which were converted into Covid care centres, have conducted only 40 days of direct classes for the students’.

The colleges have reportedly asked for the postponement as the State government had originally stated that except for the eighth semester, online examinations for other semesters would be held, he said.

Meanwhile, the Madras High Court on Thursday rejected a plea from a voter in Theni district challenging the election of Panneerselvam from Bodinayakanur Assembly constituency in 2021.