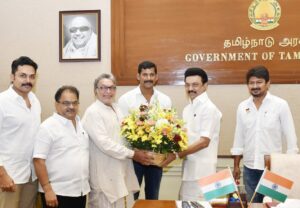 Chennai: Ahead of their swearing-in ceremony today, the newly-elected office-bearers of the South India Film Artistes Association aka Nadigar Sangam called on Chief Minister MK Stalin at the Secretariat today het and sought his wishes.

In the elections, Pandavar Ani emerged winners. Nasser was re-elected as president and Vishal as general secretary. Poochi Murugan and Kaarunas won as vice-presidents while Karthi was elected as treasurer.
All executive committee members were elected from Paandavar Ani. Swami Sankaradas Ani comprising Ishari Ganesh, Bhakiyaraj and Prashant lost the polls.

Election took place in 2019. But due to litigations, counting was postponed. After clearing all legal hurdles, the votes were counted last Sunday.

The new team assured that they would continue to strive for completing the construction of the Nadigar Sangam building besides assuring welfare of all members reeling under poverty post Covid situation.