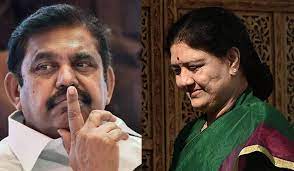 Chennai: AIADMK joint coordinator and Leader of Opposition in Tamilnadu Assembly Edappadi K Palaniswami has reiterated that there is no place for V K Sasikala in the party saying no one could give a new lease of life to a matter that has already been settled.

He said this days after party coordinator O Panneerselvam said he personally had respect and admiration for Sasikala, close aide of late Chief Minister and party supremo J Jayalalithaa.

‘Each person has a personal opinion. I too have an opinion about DMK leader M K Stalin. But, we work against each other when it comes to party and politics,’ he said.

EPS said all the party district units, barring two (Theni and Thanjavur), had passed resolutions against re-inducting Sasikala and warning of stern action against any cadre who backed her.

Panneerselvam, interacting with media after deposing before the Arumughaswami Commission probing the circumstances leading to the death of Jayalalithaa, had said that he had high respects for Sasikala, and also fondly referred to her as ‘Chinnamma’.