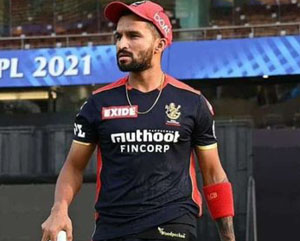 Mumbai : Royal Challengers Bangalore (RCB) on Sunday announced that they have roped in Rajat Patidar as a replacement for the injured Luvnith Sisodia for the remainder of the ongoing IPL 2022 season.

Patidar has so far played 39 first-class matches for Madhya Pradesh. In the shortest format, he has scored 861 runs in 31 matches at an average of 30.75 with his highest score being 96. He also has 7 half-centuries to his name in the 20-over format.

The right-handed batter, has previously represented the RCB franchise four times. He will join RCB for the price of Rs 20 Lakh, stated an official release.

RCB, who have so far played 2 matches this season and have won and lost a game each, will take on the Rajasthan Royals on April 5 at the Wankhede Stadium, Mumbai.

Royal Challengers Bangalore had last won their game against Kolkata Knight Riders after Dinesh Karthik took his side home in a low-scoring thriller.

The franchise had lost its opening fixture against Punjab Kings after they failed to defend 205.