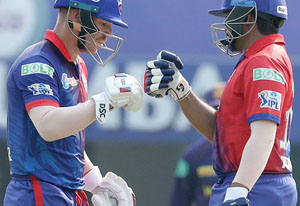 Mumbai : On a batting belter, KKR skipper Shreyas Iyer’s decision to put Delhi Capitals in backfired as they piled up 215 for five riding on half-centuries from Shaw (51 off 29 balls) and Warner (61 off 45 balls).

In reply, KKR were all-out for 171 in 19.4 overs and it was left-arm spinner Kuldeep Yadav’s evening at the B rabourne Stadium as he exacted sweet revenge against a franchise that didn’t treat him too well during his stint as his career came to a halt.

The scoreboard pressure was always telling and Kuldeep’s (4/35 in 4 overs), who is proving to be an asset for Capitals, decisively swung the match in the Rishabh Pant-led side’s favour, getting opposition skipper Shreyas Iyer (54 off 33 balls) stumped with a left-arm wrist spinner’s googly. Iyer had no clue as he came down the track and the ball turned away after pitching.

Pat Cummins didn’t play any manic knock as a Kuldeep leg-break ended his stay and then he took a magnificent skier off his own bowling to cap off a superb evening under lights.
Left-arm pacer Khaleel Ahmed (3/25 in 4 overs) bowled fast and sharp at the onset and in the end Andre Russell (24 off 21 balls) had too much to do with too little time left and result was a one-sided victory for DC.

At the start, Shaw and Warner feasted on a quality bowling attack before DC survived a scratchy middle-order show to reach a healthy 215 for 5. If Shaw-Warner added 93 to set the platform, Shardul Thakur (29 not out off 11 balls) and Axar Patel (22 off 14 balls) added 49 in just 3.2 overs to finish the innings in style.

Warner and Shaw were facing one of the most lethal pace attacks of this edition but to their advantage it was perhaps the best batting track. There was a layer of green but it was more about holding the surface which had even bounce for anyone wishing to hit through the line.

Umesh Yadav (1/48 in 4 overs) had his first bad outing in this IPL, while Warner also launched into Pat Cummins (0/51 in 4 overs) with two boundaries over cover as 50 came in four overs.

It’s a rarity to have 10 fours and two sixes being hit in the Powerplay as Iyer looked clueless. Cummins was pulled for six by Shaw, while Warner slog swept Varun Chakravarthy (1/44 in 4 overs) over mid-wicket for a six. Sunil Narine (2/21) was reverse swept as both spinners were introduced within the Powerplay after pacers got severely punished first up.