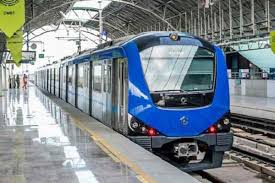 In another release, CMRL said in association with ‘On The Streets of Chennai’, it will be performing a live music performances at the Metro Stations.

‘The events are being conducting as part of celebrating Tamil culture and
heritage and AKAM (75th year of independence).’

Tags:2022.Chennai Metro Rail has said 45.46 lakh passengers travelled in its trains in April