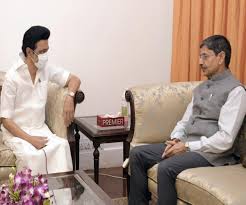 Stalin said that the Governor’s secretary informed him over phone a few minutes ago that the Bill adopted by the House has been forwarded to the Union Home Ministry for the President’s assent.

The Bill was passed by the Assembly again in February seeking exemption for the state from the National Entrance-Eligibility Test for aspiring medical professionals. The Governor had earlier rejected it.