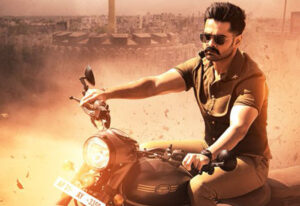 Actor Ram Potheneni-starrer The Warrior will have its first teaser launch on 14 May at 5:31 pm. Fans are eagerly looking forward to Ram Pothineni’s cop action drama.

Ram Potheneni made the announcement while sharing a new poster from the film on Twitter.

The tweeted poster features the actor riding a bike and the tweet reads, ‘Introducing S-A-T-Y-A to you all on the 14th of May! Love… #RAPO #THEWARRIORR.’

Directed by N Lingusamy, one of the highlights of the film will be Aadhi Pinisetty playing a dreaded baddie.

The film, a Telugu-Tamil bilingual, is being made on a lavish budget by Srinivasaa Chitturi under Srinivasaa Silver Screen banner. Pavan Kumar is presenting the movie.

This is the production’s house latest venture after its last year blockbuster Seetimaar.

Krithi Shetty is the heroine, while Akshara Gowda will be seen in a crucial role. Music by Devi Sri Prasad is said to be one more highlight.