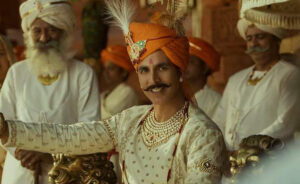 Akshay Kumar, who is gearing up for the release of his film ‘Prithviraj’, was bowled over by the script of the film, particularly the action sequences.

The actor, who will portray king Prithviraj Chauhan in the film, admitted that he felt like a kid in a candy store when he got to know the scale of action that he will get to perform in ‘Prithviraj’.

Talking about the scale of the film, which happens to be YRF’s first historical film, Akshay said in a statement, Prithviraj is mounted at a scale that will wow people and action plays an integral part in heightening the entertainment quotient of the film. Prithviraj is a big screen action extravaganza that awaits to unfold in front of the eyes of the audiences.”

It will give numerous highs given how Samrat Prithviraj Chauhan took on the responsibility of protecting the country and its people from the merciless invader Mohammad of Ghor. I was like a kid in a candy store when I realised the scale of action that I will get to perform, he added.

Speaking about the experience of pulling off the war sequences, he said, It was really tough to pull off these elaborate war sequences, wearing heavy armour in the sweltering heat but I knew that these scenes will look spectacular on the big screen and add to the extravaganza ‘Prithviraj’ is a film that’s high on patriotism, given the valour and sacrifice of the mighty king.

Tags:Akshay all thrilled about Prithviraj