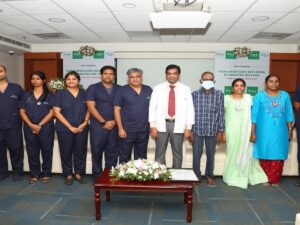 Chennai : A 33-year-old daughter–a mother of two children saved the life of her 63-year-old father, suffering from end stage liver cirrhosis, by donating her liver and the transplant was successfully done by a team of doctors at the Fortis Hospital, Vadapalani, in the city. The man was suffering from symptoms of liver ailments like fatigue, loss of appetite, and nausea for many years. When the patient visited Fortis Vadapalani, he was in a critical condition and was diagnosed with end stage liver cirrhosis.

Dr. Swati Raju, Transplant Hepatologist, was the first to evaluate and diagnose him and the reports revealed that the liver function was deranged to the extent where liver transplant was recommended as the only option for survival. Dr. Sugi Subramaniam, Liver Transplant Surgeon, did the evaluation and identified that the youngest daughter of the patient, who is also a mother to two children, met the requirements for an ideal match for liver donation. The donor and her family members were counselled by the transplant team to help them understand the complete process from pre-surgical evaluation for donor and recipient, to post-surgical recovery.

Talking to reporters, Dr.Puneet Dargan, Senior Consultant – Liver Transplant Surgeon said “as a father it was emotional for the recipient to initially accept a part of his daughter’s liver. However, once he understood the transplant and how the liver will heal and grow, he agreed. The team of experts from Fortis Vadapalani, led by Dr. Vivek Vij, operated for eight  hours and successfully transplanted the liver.

The patient and donor were then transferred to the dedicated Liver ICU, under the supervision of the Critical Care Liver Team, led by Dr. Tanuja Mallik, Head of Anesthesiology and Critical Care. The donor was shifted from ICU to ward on the fifth day post-surgery and was discharged on the ninth day. She said ‘I didn’t think twice about doing this as this was for my father and I wanted him there for his grandkids. My husband was my major support throughout this journey. He was with me for every step. I am very happy to see the improvements in my father’s health post-transplant.”

Since this was my first ever surgery, I was a little nervous but with the detailed counselling from the doctors, I was convinced to proceed with the donation”, she
said. The recipient was shifted from ICU to ward on the sixth day and discharged on the 17 th day post liver transplant. ‘I feel blessed and am immensely grateful to my
daughter. Without her, I wouldn’t have been here. My health and quality of life now has improved significantly compared to how I had been feeling in the last few years, ” he added. It gives us immense pleasure to see both the donor and recipient in good health and living a normal life’, added Dr. Poorna Chandran, Medical Superintendent .

Tags:A 33-year-old daughter--a mother of two children saved the life of her 63-year-old fatherby donating her liver and the transplant was successfully done by a team of doctors at the Fortis Hospitalin the city.suffering from end stage liver cirrhosisvadapalani