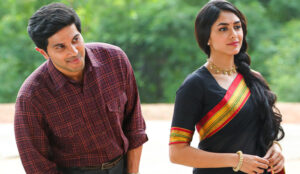 Hey Sita Hey Rama is filled with vintage visuals which takes us into a trance. On a whole song is delight to both eyes and ears.  Surprisingly on the day the lyrical video released, their first collaboration ‘Mahanati’ completed 4 glorious years.

Earlier titled ‘Production No. 7’, the film being produced by Swapna Cinema and to be presented by Vijayanthi Movies is bankrolled by Aswinin Dutt and directed by Hanu Raghavapudi. According to the team, the film is a love story set in a war backdrop. The film has musical score by Vishal Chandrasekhar, cinematography by P S Vinod, art direction by Vaishnavi Reddy and Faisal Ali Khan, production design by Sunil Babu and costumes by Sheetal Sharma.

Tags:Sits Ramam is fast shaping up