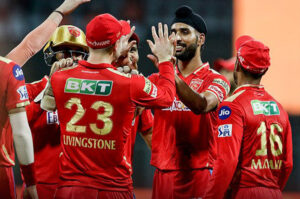 Mumbai : Punjab Kings beat Sunrisers Hyderabad by five wickets in an inconsequential last league match of the IPL here on Sunday. Punjab chased down the target of 158 with 29 balls to spare with Liam Livingstone top-scoring with 49 not out off 22 balls. Shikhar Dhawan chipped in with 39. For SRH, Fazalhaq Farooqi took two wickets for 32 runs.

Earlier, opting to bat, Sunrisers Hyderabad posted 157 for 8. Abhishek Sharma top-scored for SRH with 43 while Romario Shepherd and Washington Sundar chipped in with 26 not out and 25 respectively. For Punjab, Harpreet Brar and Nathan Ellis took three wickets apiece.

Harpreet Brar, Player of the Match, said, ‘ When we came here, we thought it was a good pitch for the spinners. I have conceded runs and so have the other spinners in the tournament, so I wanted to finish on a good note today. I just tried to bowl in the right areas and I wanted to keep calm under pressure. I tried to work on my skills as much as possible. Felt good after getting his (Markram’s) wicket. I got some turn and bounce on that ball, pleased that he got stumped. I am happy for Arshdeep, now that he will play for India. That is what every player dreams of, playing for their country one day. I need to improve on few areas before the next season. I have been away from home since 3-4 months, so I want to spend some time with my family.

Mayank Agarwal, Winning captain, said, ‘It’s going to be sore, probably going for an X-ray now. They never expected a no-ball, so he wasn’t ready. I asked him (Malik) whether he was wearing a protective gear and he shouldn’t get hurt. There are a lot of positives for us. The way Livingstone batted, Dhawan played well. Bairstow since the time he started to open. If we go out there and play the kind of cricket we play, we can do well in the next season. We couldn’t stitch two back-to-back wins. We lost wickets in a cluster, and that at times derailed us. We have played an aggressive brand of cricket over all. We are going to sit and discuss now after the IPL. We were here to get two points and we were here to enjoy ourselves.

Liam Livingstone, said, ‘it was nice. I felt like I have been hitting the ball well all tournament, but got out in stupid ways at times too early, but it’s the way I have played, I have tried to play and it’s the way we have tried to play. The way we played today was perfect, we got the balance right between attacking and being smart. It has been a long old two-and-a-half months, nice to get out of here to be honest. I’m a big believer in matchups, I knew today my two matchups were Umran and Washi, I tried to wait for them, they did not come back because they obviously knew that I was their matchup.

I tried to play the two left-armers with a bit more respect and try and wait for the right-armers where I feel a little bit more comfortable. I let myself a bit down, when I tried to hit their left-arm spinner over extra-cover; don’t think I have ever done that in my life. It’s all about learning and I will try to keep better at things like that and hopefully take my game to the next level. You always got to be aware of the game situation, we needed run-a-ball, we did not have to all guns blazing. I knew at some point there would be an over where I try and take down.

The scoreboard adds pressure and sometimes it’s not the right time but when the matchups comes on we have to go – like today first-ball if it was in my area, I had to go because it was one of my matchups. Obviously nice to prove a few people wrong. I had a few comments after last year’s IPL. I’m still learning, still developing and hopefully playing in all these different tournaments around the world, It’s all about gaining that experience and try to become a better player. I will go back to England now and and try and use what I’ve learnt this tournament in the next tournament.

I love bowling, it is not the easiest thing, it does not come naturally to me, I would’ve probably liked to have bowl more through the tournament. Thankfully towards the end of the tournament, I got in Anil and Mayank’s ear enough, that they let me bowl (smiles). The way we play the T20 game is to affect the game in all three facets and I feel I can do that and it’s nice to be backed by the squad like I have been in this environment.’