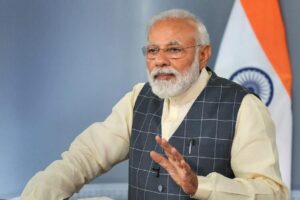 Chennai : Prime Minister Narendra Modi will make a brief visit to the city on May 26 to launch various welfare programmes to be held at the Jawaharlal Nehru Multi-purpose Indoor Stadium. Airport sources said, According to the tentative programme, the Prime Minister will arrive from Hyderabad at 5.10 p.m. and leave for New Delhi at 7.40 p.m. After a brief reception at the airport on arrival, the Prime Minister will reach INS Adyar by an IAF helicopter from where he will reach the stadium by road. During the event, Modi will launch various National Highway projects, Railways and several Central government projects.

The Prime Minister will also lay the foundation stone for the 20.6 km double-decker elevated expressway between Chennai Port and Maduravoyal to be built at a cost of Rs 5,855 crore. This is the second time a PM will be laying a foundation stone for the project, which has been revived as a double decker after a decade.Tamil Nadu Chief Minister M.K.Stalin and his Cabinet colleagues will participate in the function.Immediately after the event, the Prime Minister will reach INS Adyar and board a chopper to reach the airport, from where he will leave for New Delhi at 7.40 p.m.

Tags:Modi to visit Chennai 26 May