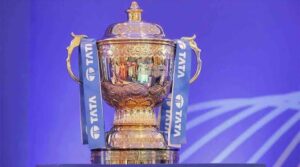 The winner of the Qualifier 1 match will get a direct entry into the final, while the loser will get one more chance to qualify for the IPL 2022 final. Gujarat Titans and Rajasthan Royals have faced each other once before. Both the teams played a match against each other during the league stage of IPL 2022.

Gujarat Titans are led by Hardik Pandya in IPL 2022. The team played 14 matches during the league stage. They won 10 games and lost 4. With 20 points and a net run rate of +0.316, Gujarat Titans finished at the top spot in the points table.

Skipper Hardik Pandya is the top run-getter for the team with 413 runs in 13 games, Shubman Gill is next with 403 runs. In bowling, Rashid Khan and Mohammed Shami are the top wicket-taker for Gujarat Titans. Both of them have scalped 18 wickets each in 14 games so far.

Rajasthan Royals are led by Sanju Samson in IPL 2022. The team played 14 matches during the league stage. They won 9 games and lost 5. With 18 points and a net run rate of +0.298, Rajasthan Royals finished in the 2nd spot in the points table.

Jos Buttler is the top run-scorer for RR. With 629 runs in 14 games, he has scored the most runs in the tournament so far. Sanju Samson arrives next with 374 runs. In bowling, Yuzvendra Chahal is the top wicket-taker for the team as well as the tournament with 26 scalps. Prasidh Krishna follows him with 15 wickets.