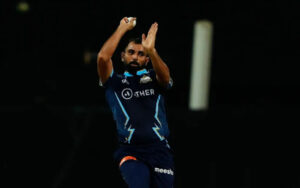 Kolkata : India and Gujarat Titans speedster Mohammed Shami, the highest wicket-taker in power-play overs this IPL season, on Monday said the secret for his success was to bowl in the right areas. Shami has taken 11 wickets at 20 runs apiece to set it up for the Titans in the power-play overs.

‘In T20 cricket, we focus on variations — slower ones, bouncers. But according to me it’s about bowling in the right areas then it becomes a difficult score. That’s always my gameplan,’ Shami said during a virtual media interaction on the eve of the first IPL Qualifier against Rajasthan Royals.

The white ball does not swing after a few overs. So it’s always my gameplan to use the new ball as much as you can. You can say it’s all about experience. It’s very important to control your line and length. You keep thinking many things when you play the T20 format,’ he added.

You know the ground inside-out, it gives a different feeling. You are always pumped up playing in front of the Eden crowd,’ Shami said. Orange Cap holder Jos Buttler, who has three centuries and as many half-centuries this season, will stand in his way upfront but Shami is not worried about the match-up.

As a player, you don’t think much about the batter. Every batter has a weak point. You have to back your skills. I just do that, I never look at the name and who’s batting against me,’ he signed off.

Tags:Key is to bowl in right areas in power-play: Shami