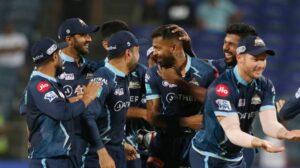 Gujarat Titans produced a clinical chase against Rajasthan Royals with David Miller and captain Hardik Pandya playing the starring roles as they entered the final with a seven-wicket win in Kolkata. Chasing 189, David Miller hit an unbeaten 68 while Pandya made 40 no as the IPL debutant overhauled the target in 19.3 overs to finish with 191/3. GT, the table-toppers of the league stage, will play finals.
David Miller, Player of the Match, said, ‘I think opportunity, firstly (what’s changed?). I’ve been given a role, I felt extremely backed from the outset. My personal game – I’m enjoying my role, I’ve been playing for many years now. Understanding my game a lot better. In high-pressure situations you tend to go away from your gameplan but I feel like I’m trying to keep everything together close to the gameplan. There has been a lot of going wide to me on the off-side, so I decided actually for the first time to step across. Backed myself and went with it. The rest I tried to hit as hard as possible. That’s the joys of IPL – you play for different teams, get to meet different players. It was a new team so there are a few butterflies here and there. From the first win, everything sort of aligned. You have to control what you can, can’t think too much ahead. Concentrate on your breathing, and if it’s in your area, you have to capitalise. We’ve got a few days off. There’s a bus trip back, we’ll have a few drinks and celebrate.’
Hardik Pandya, Gujarat Titans captain, ‘ I’ve started to balance things in my life. Has been a constant effort through the last couple of years. In the end, my family, my son, my wife, and my brother as well have played a big role. They kind of allowed me to get neutral in life. I look forward to go home and spend some time with family, and that’s made me a better cricketer as well. Don’t have much feeling right now. Trying to be neutral again I’ll say. All the 23 players are different characters, bring different things to the table. Was saying to Miller as well, if you have good people around you, you get good things. It’s been that story for us. The kind of people we have, the genuine human beings we have.. I genuinely see even the players in the dugout are trying and praying for them to make sure they do well. That is something fantastic and that is the reason we have reached where we have reached. It’s all about making sure we respect this game. Rash has been fantastic throughout the season and throughout his cricketing journey. But I’m proud of Miller – the way we have played. Wherever my team requires me to play, I don’t generally demand where I want to bat. That’s not how I’ve got success. I’ve got success by playing for the team, no matter how scratchy I look, how good I look, irrelevant for me. The batting order we’ve had – we’ve had to make sure everyone chips in. We appreciate those 10s, 15s, 20s.’
Tags:Gujarat Titans IPL Hardik