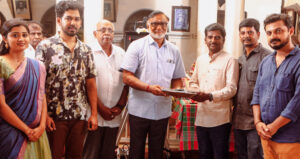 ARK Saravan of Maragadha Naanayam, is teaming up with Hiphop Tamizha Adhi for a new film. It is titled Veeran. The film began in Pollachi.

The makers say that Veeran will be a fantasy comedy. The team are planning to complete the first schedule in Pollachi before returning to Chennai for the rest of the film. Athira Raj is playing the female lead in the film which also stars Munishkanth, Kaali Venkat and Sassi Selvaraj.

The film is produced by Sendhil Thyagarajan and Arjun Thyagarajan’s Sathya Jyothi Films.