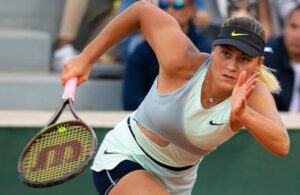 The men’s and women’s tennis governing bodies last week took away ranking points from the grasscourt Grand Slam after its organisers decided to exclude players from Russia and Belarus in the wake of Moscow’s invasion of Ukraine.

Ranking points determine a player’s ability to enter events and receive seedings, so stripping them from Wimbledon effectively reduces the event to an exhibition tournament. The council, which is made up of current players who act as a voice for athletes on tour with the governing body, supported the WTA’s decision to strip ranking points from Wimbledon, with American member Sloane Stephens saying that the decision was not ‘taken lightly’.

The 19-year-old Kostyuk, however, said she fully supported Wimbledon’s decision to not allow players from Russia and Belarus to compete. I would say 80-85% of the players had nothing to do with the (WTA) decision, she told Reuters in an interview after her first-round defeat to Mayar Sherif in the French Open on Tuesday. It’s so ridiculous I couldn’t believe it. None of the players’ representatives contacted me. None of them asked about my opinion, what I think. It’s like Ukrainian players don’t exist.’