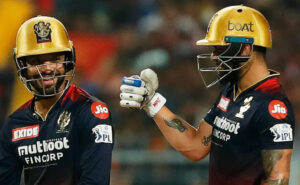 Mumbai : Rajat Patidar starred for Royal Challengers Bangalore as they defeated Lucknow Super Giants by 14 runs in the Eliminator clash of IPL 2022 here at Eden Gardens in Kolkata on Wednesday. With this win, RCB will play against Rajasthan Royals in Qualifier 2 at Narendra Modi Stadium, Ahmedabad on Friday for a place in the final against Gujarat Titans.

Batting first, an unbeaten century by Rajat Patidar (112*) and his 92-run stand with wicketkeeper batter Dinesh Karthik powered Royal Challengers Bangalore to a massive 207/4 in their 20 overs against IPL debutants Lucknow Super Giants.

It was a memorable day for the RCB batting lineup as they smashed the opposition hard. LSG had no answer for the show put up by the batters. Chasing 208, Lucknow had a decent start as their score read 62/2 after the first six overs.

Mohammed Siraj removed Quinton De Kock in the very first over after the SA batter smashed him for a huge six. De Kock mistimed on slog as the ball went straight to RCB skipper Faf Du Plessis. Manan Vohra then joined LSG skipper KL Rahul on the crease and the duo started clocking runs on board. With the score at 20/1 after three overs, Vohra decided to shift gears as he gathered 17 runs off 4 balls before getting dismissed in the 5th over by Josh Hazlewood. Vohra departed for 19 off 11 balls.

Rajat Patidar, said, ‘When I time the ball, my focus was on it. The last over of the powerplay when Krunal was bowling to me, my execution went fine then and I got confident afterwards. The wicket was pretty good and I played some good shots. I never feel any pressure as I think I have the ability to make up for the dots. I was busy after the 2021 IPL playing for my club. I wasn’t picked after the 2021 IPL but that wasn’t in my control.’

Faf du Plessis said, ‘Today was a special day. The guys put in a special performance. Over the moon. For a young guy to play like he did. The way he celebrated also tells you he has a good head on his shoulders. His hundred was one of the best I have seen in the IPL. Our bowlers were clear and calm and that was good . He has got all the shots. Every single time he attacks, he transfers the pressure back on the opposition.

It is important to celebrate this despite something big is coming up. We were very happy as a group. As a group we needed some calm presence. We didn’t feel like it was a big game. Every one was calm and relaxed. Harshal is the joker in the pack. A special card I can pick. He bowls the important overs. Second last one over from him changed the game for us.’

Rahul, LSG captain, said, ‘I think it’s quite obvious – the reasons why we didn’t win. We let ourselves down in the field. Dropping easy catches never helps. Difference was obviously Patidar playing such a knock. When someone in the top three scores a hundred, more often the team wins. They fielded really well and we were poor. We’ll take back a lot of positives. It’s a new franchise. We’ve made a lot of mistakes, every team does that.

Have to try and come back stronger. It’s a young team. They’ll learn from their mistakes, go back home and try and be better players. Mohsin showed everybody how good he is and what skill he possesses. As he grows with confidence, he’ll be able to clock speeds which are much higher. He will learn and develop a few more skills hopefully by next season.’