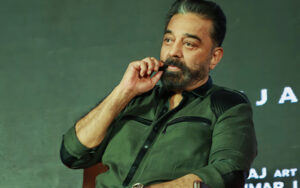 We have made a good film. It will certainly be different, said Kamal Haasan on his forthcoming release  Vikram. Directed by Lokesh Kanagaraj, it also stars Fahadh Faasil, Vijay Sethupathi, and Chemban Vinod Jose among others. Vikram is confirmed for a wide theatrical release on 3 June. The film has been cleared by censors with a U/A certificate. Music is by Anirudh Ravichander.

Speaking to news petsons, Kamal said, ‘It was Lokesh’s idea to name this film Vikram. I had thought of a one-liner for the 1986 film, which writer Sujatha thought was way ahead of time. Lokesh wanted to turn it into a film . Kamal Haasan said, ‘We believe we have created a good film. I earlier said people know where I invest my money. I’m also planning on spending it for the public. I don’t have much money, but I’m sure this film’s profits will go to the needy.’

Requesting his fans to watch the movie on big screen, Kamal Haasan said, ‘The whole technical crew have given their. None slept and gave their best.’ Talking about shooting the film, he revealed that they ensured that since they were shooting during the times of the pandemic, they shot in open spaces.

‘I got Covid because I was travelling around a lot. We made sure no one in the team was infected and took ample precautions, he added. Vikram is a film that will be part of the list of films we can introduce to the world which has a preconceived notion about Indian cinema, he said.