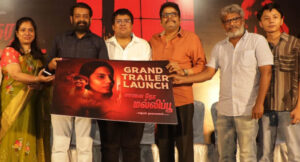 Maalainera Mallipoo, directed by 21- year-old youngster Sanjay Narayanan and produced by An Every Frame Matters production features newcomers. The movie speaks about a sex worker and an emotional relationship between her and her son. The movie also deals about how the society view them.

Theatre artist Vinithra Menon and a young boy Aswin play the lead roles. Hardik Sakthivel has scored the music.
Heaping laurels on Sanjay Narayanan, filmmaker Vasanth says, ‘Though it is his first film, he has handled everything well. The movie looks promising. Vinithra has given her best’.

On his part, Sanjay Narayanan said, ‘It is a small film with big idea. I thank my whole cast and crew for their co-operation.’ Veteran directors K S Ravilumar, Subramanian Siva also spike. Vinithra thanked the team for the opportunity and appreciated Sanjay Narayanan. ‘A strong subject handled well’, she added.