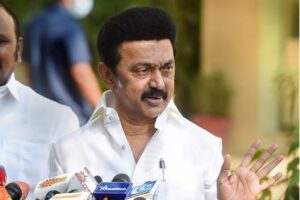 Chief Minister MK Stalin, who is on a two-day visit to  Cauvery delta region toured Mayiladuthurai, Nagapattinam, Thanjavur, Tiruchi and Tiruvarur districts and interacted with farmers.

The Chief Minister this afternoon supervised the laying of seeds through scientific means at Ananthamangalam village near Tharangampadi in Mayiladuthurai district. The Kuruvai cultivation being taken up using such modern methods would need optimum water, officials said.

Stalin meanwhile visited Thirukadaiyoor where he inspected desilting works being taken up across various canals.

During his visit to several villages in Thiruvaroor district, he interacted with farmers and listened to their grievances.

He received petitions from farmers during the tour and promised to address their woes at the earliest.