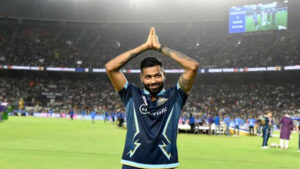 Hardik led from the front with a three-wicket haul and a crucial 34 as Gujarat defeated former champions Rajasthan Royals by seven wickets to lift the 2022 IPL trophy on Sunday.

He was named the ‘Player of the Match’ for his brilliant performance. Earlier, several other former players including Virender Sehwag and Ravi Shatri lauded Hardik’s captaincy in the IPL 2022.

Fantastic achievement for a new franchise… If India need a captain in a couple of years I wouldn’t look past @hardikpandya7… Well done Gujurat .. #IPL2022, Vaughan tweeted.

Rohit Sharma is currently the Indian captain across formats, having taken over from Virat Kohli.