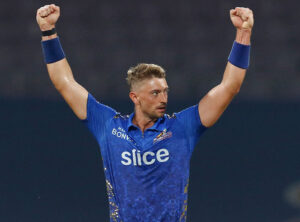 Mumbai : Australia’s fast bowler Daniel Sams believes the Mumbai Indians’ environment is really helpful for players’ growth. The pacer played 11 matches for Mumbai Indians in the 15th edition of IPL and also scalped 13 wickets with an economy rate of 8.81.

I think this whole Mumbai Indians environment is really helpful for building a person a cricketer so it’s been awesome, chatting with MJ (Mahela Jayawardene) and Bondy (Shane Bond) I found really helpful, those conversations I had with MJ just about what he did when he was struggling and he just talked about keeping it simple being relaxed, said Sams in a video shared by MI.

Sams also talked about this year’s campaign of MI and how they were not up to the point regarding their performance in the tournament. Obviously there were some challenges, some good time around, we haven’t quite performed the way we’ve wanted to but we are excited with what’s to come next year, said Sams.

I think a lot of us in this squad have had to learn and deal with a lot of stuff because of the way that we have performed, I think it’s not being the most ideal season, I think it is an important season for myself for everyone to become better cricketers better players, he added.

Fast bowler further added that he is proud of himself as to how he bounced back in tough situations and he also mentioned mental skill as an important aspect. Obviously, there were some challenges, some good time around, we haven’t quite performed the way we’ve wanted to but we are excited about what’s to come next year.

We talk about skills and execution and stuff a lot but I think the one thing that has developed for me is the mental skills. I think this tournament has really helped me to build another layer or maybe more than one layer on top of that, said Sams.

Just going through tough performances how you bounce back responding to those performances how you think about yourself what you think about when you are going into the next game all these challenges I have to overcome with the help of this tournament. Working on myself a little bit and coming back to perform and have an impact on the team, is probably one of the prouder moments of my career being able to do that in such a high-pressure environment which is obviously the TATA IPL, he added.

Tags:Daniel Sams thanks MI for his growth