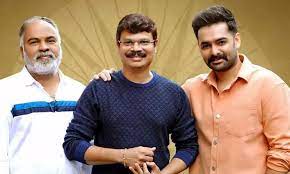 Boyapti Sreenu one of the most successful directors in Telugu cinema, who directed blockbuster films like Bhadra, Tulasi, Simha, Legend, Sarrainodu, Jaya Janaki Nayaka, and most recently Akhanda will begin his next now.

It will be a Pan-Indian film with Ram Pothineni in the lead. Srinivasaa Chhitturi is producing the film tentatively titled ‘BoyapatiRAPO’ under Srinivasaa Silver Screens banner. Pavan Kumar is presenting the film. Ram Pothineni is one of the most happening heroes in Telugu film industry. This massive movie marks Ram Pothineni’s 20th film and he recently wrapped up shooting for The Warriorr.

Talking about the collaboration Srinivasaa Chhitturi said, we are delighted to present the film, helmed by Boyapati Sreenu. It’s a pleasure to work with Ram Pothineni again so soon after The Warriorr. We intend to release the film worldwide in Telugu, Tamil, Hindi, Kannada, and Malayalam.