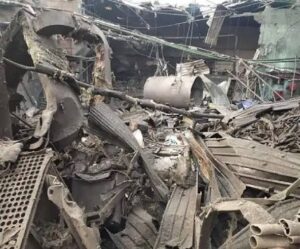 At least nine people died and 19 were injured after a boiler exploded at a chemical factory in western Uttar Pradesh’s Hapur district on Saturday afternoon, police said.
The injured have been shifted to a hospital for the treatment, Hapur IG Praveen Kumar told reporters.
A probe has begun into the matter, the IG said, adding that action will be taken against the people responsible for the incident.

Meanwhile, UP Chief Minister Yogi Adityanath offered his condolences to the bereaved families and directed officials to extend all possible help to victims and their kin, his office stated in a tweet in Hindi.