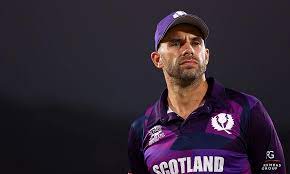 London : Kyle Coetzer on Friday announced that he would be stepping down as Scotland captain after his team’s World Cup Super League Division Two game against UAE. Coetzer captained Scotland in 110 out of his 214 matches.

He made their first-ever century in the ODI World Cup – 156 against Bangladesh in 2015 – and in 2021, he led them past qualifying and into the main round of the T20 World Cup. It’s been an absolute pleasure to lead this group through various stages in our growth and development and captain my country and I will look back on the time with such fondness.

I’m extremely proud of where we have got to and I’m even more excited with where this team can go to under its next leader, said Coetzer. It’s been fantastic to see how the players are managing themselves on the field recently and to effectively have more than one leader out there has been a really positive and encouraging sign for me. It was this that made me feel it was the right time to share my decision and step down, he added.

Coetzer’s successor will be appointed before the team’s next series in July, against Namibia and Nepal. The coaches, led by Shane Burger, will decide on who takes up the role in consultation with senior players and the board’s interim Head of Performance, Toby Bailey.

Tags:Coetzer steps down as Scotland captain