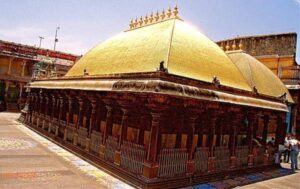 Minister for Hindu Religious and Charitable Endowments (HR&CE) and senior DMK leader, P.K. Sekar Babu said on Monday that the government would act as a bridge between the ‘Dheekshithars’ and Sri Sabanayagar temple in Chidambaram.

He also said that the government would take a just and balanced decision without hurting anyone’s sentiments.

The HR&CE Minister was speaking to reporters after having darshan at the Kanagasabhai mandapam in the Sri Sabanayagar temple, Chidambaram. The Minister said that Chief Minister of Tamil Nadu, M.K. Stalin has directed that the expectations of all sections of the society should be met on a balanced scale without hurting any particular section.

He also said that he shared the views of the government with the Dheekshithars and elicited their views as also perused the rules governing the administration of the temple.