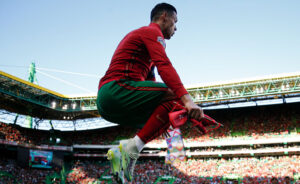 Lisbon : Cristiano Ronaldo marshalled Portugal past Switzerland in the Nations League on Sunday as Gavi made history becoming Spain’s youngest ever scorer. Ronaldo scored two goals in four first half minutes and had a third ruled offside by VAR as Portugal crushed Switzerland 4-0 in Lisbon.

The Manchester United striker had set up William Carvalho for the opener with Joao Cancelo completing the rout to fire Portugal to the top of League A, Group 2, on goal difference from the Czech Republic. In Prague, Jakub Pesek put the hosts in front before Gavi levelled with a low curling left-footer at the record age of 17 years and 304 days just before halftime.

Jan Kuchta had the Czechs back in control with a delicate chip but Athletic Bilbao defender Inigo Martinez headed home in the final minute to salvage a 2-2 draw. It is is wonderful to be able to say that we are disappointed to lose points against Spain, said Czech captain Tomas Soucek.

We showed heart and great teamwork. If somebody told us that we would have four points before these two games, we would have taken it. We have started well and look forward to the next games. We lacked fluency so the game was really tough shrugged Spain coach Luis Enrique. Martinez conceded it wasn’t Spain’s finest match.

Meanwhile, Argentina forward Lionel Messi scored five goals in a 5-0 friendly win over Estonia on Sunday, an effort which helped him overtake Hungary great Ferenc Puskas in the all-time men’s international top-scorers list. The former Barcelona player got to shine once more on Spanish soil, in a match played at the El Sadar Stadium in the northern city of Pamplona. Messi, who has now netted 86 times in 162 matches on international duty, opened the scoring with a penalty kick in the eighth minute. He waited for Estonia goalkeeper Matvei Igonen to commit before firing the ball into the bottom right corner.

The 34-year-old Messi (45’) doubled Argentina’s lead just before half-time, adding another goal two minutes into the second half. He completed the rout with two more strikes in the 71st and 76th minute. On the night, the Argentina captain caught up and left behind former Hungary and Spain forward Puskas, who scored 84 goals in 89 matches.

Messi is three goals behind former Malaysia forward Mokhtar Dahari (89), who is third. Iran’s Ali Daei (109) is second in the list while Portugal’s Cristiano Ronaldo tops the chart with 117 goals.