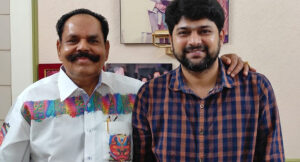 Remember he introduced Shankar as filmmaker through his film Gentleman years ago.

Now Kunjumon is producing the Gentleman 2. Keeravani is the music composer for the film.

He also announced Nayanthara Chakravarthy and Priya Lal as the heroines.

Kunjumon has revealed that A Gokul Krishna who made the Aaha Kalyanam starring Nani before will direct the sequel to Gentleman.

Gokul Krishna had worked in films like Billa, Arindhum Ariyamalum, Sarvam, as co-director for VishnuVardhan.