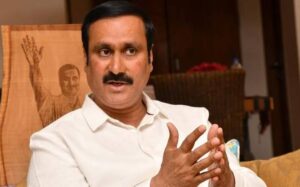 The newly-elected PMK president Anbumani Ramadoss has a tough road ahead. He has to set right lot of things in his party and it is not very easy for him, say political analysts.
Speaking to News Today, Gangadharan, a political commentator, said, ‘PMK is at the low in Tamilnadu now. They have seen defeats in all recent elections. Anbumani has to infuse fresh blood’.
His elevation to top party post today is just ceremonial. He had faced 2016 as Chief Ministerial candidate of the PMK. The party is seen as someone which favours one particular community. Anbumani should work hard to shed this image on the party as he had been saying often that PMK always fights for social justice, says Damodaran,  a political observor.
They have lost votes in their strong areas in northern Tamilnadu. It is not easy to regain them. A fresh strategy is the need of the hour, he added
Soon after he was elected party president,  Anbumani met Chief Minister MK Stalin and Leader of Opposition EPS.
He also expressed confidence that in 2026 Assembly elections,  PMK will win majority of seats and form the goverment.
Tags:Pmk anbumani