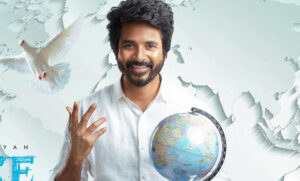 The first look poster of the movie was released yesterday.

The makers have announced that they intend to release Prince on August 31 on the auspicious occasion of Vinayaka Chavithi day in Telugu and Tamil around the world.

Maria Ryaboshapka, the Ukrainian actress last seen in ‘Special Ops 1.5: The Himmat Story’, plays the female lead in the film.

Actor Sathyaraj also has an important role in the movie.

Its music has been composed by S Thaman.