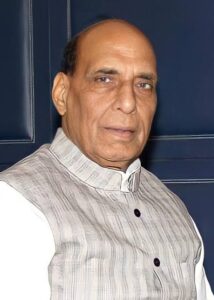 Stressing that India is a peace-loving nation which does not want war, Defence Minister Rajnath Singh today said hat the country can, however, give a befitting reply.
It (India) has never attacked any country, nor has it captured an inch of anyone’s land. However, if anyone casts an evil eye on us, we will give a befitting reply, Rajnath Singh said, speaking at the 28th Joint Civil-Military Training Programme at Lal Bahadur Shastri National Academy of Administration (LBSNAA) in Mussoorie, Uttarakhand.

Though he did not specify the evil eye, the border row with China in Ladakh has been an area of concern for India. Troops from the two countries have been locked in a tense standoff in eastern Ladakh since May 5, 2020, when a violent clash erupted in the Pangong Lake region. China is continuing to harden its position along the Line of Actual Control with India, US Defence Secretary Lloyd James Austin said recently.