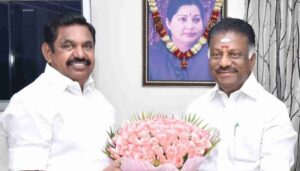 A day after many of AIADMK district secretaries, at an internal meeting, spoke in favour of a unitary leadership in the party, hectic parleys are on at the party convenor and former Chief Minister O Pannerselvam’s residence here.

Reports say that former Ministers and senior leaders of the party including Dindigul Srinivasan, Udhayakumar held discussions with former Chief Minister Edapaddi K Palaniswami and left for OPS’ house to deliberate on the discussions. The leaders were reportedly trying to smoke a peace pipe between EPS and OPS.

Posters were out in Theni this morning urging OPS to take over the mantle of the party.