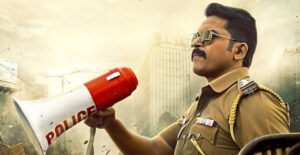 Sources in the know say that the team headed to Azerbaijan just to shoot important portions of the film.

Bollywood actor Chunky Pandey plays the villain and the movie is believed to have shot inside the Parliament of Azerbaijan, something which no film crew has managed to do before.

Following the schedule in Azerbaijan, the team headed to Georgia to shoot.

Shooting at both these places has cost the production house a whopping Rs four crore. Now, the team is back in Chennai, where shooting is on in full swing.

S Lakshman Kumar is producing this film under the banner Prince Pictures.

Sources say that Sardar will be actor Karthi’s biggest film in terms of budget till date.

The film, which features actresses Raashi Khanna and Rajisha Vijayan as the female leads, will also see actress Laila make a comeback.