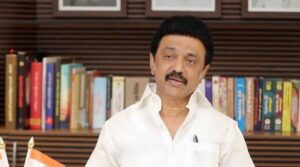 Chief Minister M K Stalin presented a gold investment bond for Rs 10 crore to the authorities of the Irukkakudi Mariamman Temple in Virudhu Nagar district at a function in the state secretariat.

The government had announced in the policy note for 2021-22 of HR and CE department last year that a scheme would be implemented for monetizing gold received by HR&CE temples from devotees during the last ten years by melting such unutilized gold at the government refinery in Mumbai and depositing them as pure gold bars in names of temples in banks.

The committee of Irukkankudi temple segregated 27,250.500 grams of gold on April 1, 2022, under the supervision of the judge. The gold was handed over to the manager of the Sattur branch of the State Bank of India. On April 18, the gold was converted into pure gold bars at the refinery in Mumbai in the presence of the concerned judge and officials.