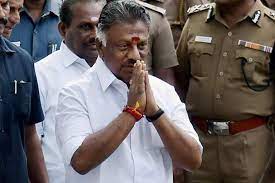 The fight for leadership in AIADMK seems to have taken a new turn with both EPS and OPS reportedly calling district secretaries and seeking their support to become the single leader of AIADMK.

Meanwhile, posters urging the leaders to take over the leadership of the party were seen in several parts of the State.

has also reached out to the district secretaries and the headquarters office-bearers for a meeting with the leader in a hotel in Chennai on Saturday morning, in an attempt to boast his strength ahead of the crucial general council meeting.

The principal opposition party in Tamil Nadu has convened a meeting of its general council and executive committee on June 23 to discuss several crucial issues confronting the party and the latest political developments
Tags:AIADMK EPS OPS