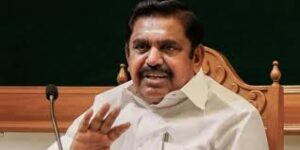 Former AIADMK Chief Minister and co-convenor of the party Edappadi K Palaniswami reached the venue of General Council meeting at Vanagaram to grand welcome this morning.
Cadres welcomed EPS with slogans hailing him the leader of the AIADMK. They whsitled to express their support to him. As soon as EPS entered the hall, GC members and cadres stood up and applauded.
Political analysts say EPS is using the opportunity to show his strength. He has held meetings already with his supporters. He is using the meeting to prove appoint that party stands behind him.
As far as single leadership is concerned, a majority of GC members and district secretaries have stood behind EPS. OPS has to sweat it out to prove his clout, they add.
Tags:EPS OPS AIADMK Meet GC