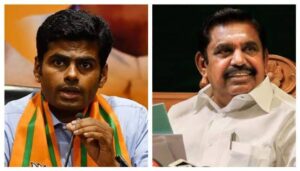 After a tumultuous AIADMK GC meet that lasted for just few minutes today in which EPS was hailed by all and OPS was snubbed, Tamilnadu BJP chief Annamalai called on EPS at his residence in Greenways Road.

The two leaders are expected reportedly discussed about the happenings in GC meet. Earlier, senior party leader K P Munusamy announced that all the 23 resolutions which were approved by OPS, have been rejected by the general council members. The members want only unitary leadership, he asserted.

He also announced that in the next GC Palaniswami will be unanimously elected as the General Secretary of the party as per the wishes of the majority of party cadres.

He said all resolutions will be passed only when the party reintroduces them along with a resolution for unitary leadership.