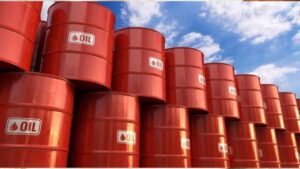 New Delhi : India’s crude oil imports from Russia have jumped over 50 times since April and now make up for 10 per cent of all crude bought from overseas, a senior government official said on Thursday. Russian oil made up for just 0.2 per cent of all oil imported by India prior to the Ukraine war. ”Russia oil now makes up 10 per cent of India’s oil import basket in April. It is now among the top 10 suppliers,” the official told reporters here. As much as 40 per cent of the Russian oil has been bought by private refiners – Reliance Industries and Rosneft-backed Nayara Energy. Last month, Russia overtook Saudi Arabia to become India’s second-biggest supplier of oil behind Iraq as refiners snapped up Russian crude available at a deep discount following the war in Ukraine. Indian refiners bought about 25 million barrels of Russian oil in May. Russian-origin crude accounted for 10 per cent of India’s total seaborne imports in April for the first time, rising from 0.2 per cent throughout 2021 and Q1 2022.