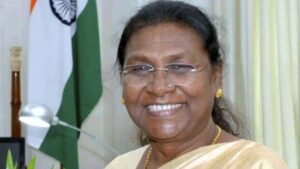 The presidential candidate nominated by the Bharatiya Janata Party-led NDA, Draupadi Murmu is scheduled to file her nomination papers on Friday.

The sources also informed that Prime Minister Narendra Modi will be proposing her name for the nomination on June 24, which will be seconded by the party’s national president JP Nadda.

The sources said that the BJP has invited all of their allies to join in the nomination ceremony including the chief ministers of NDA-ruled states of the country.